Every year there are approximately 250,000 strains, sprains, and tears, which affect the neck, the upper back, and the shoulder. These injuries are the most common, comprising 75% of all upper extremity injuries, costing the economy well over $30 Billion dollars in lost wages, lost production, and sometimes lost careers due to a long-term debilitating injury.

Research has shown that musculoskeletal injuries are among the most prevalent health problems of middle and old age. In addition, age may increase the probability or severity of soft tissue damage from an injury.

Neck Guard becomes critically important because age-related injuries can impair one’s health, and severely limit one’s ability to lead an active and independent lifestyle. So whether you are a homeowner with a weekend project, or a professional contractor, Neck Guard offers the performance you need, and the comfort you desire. 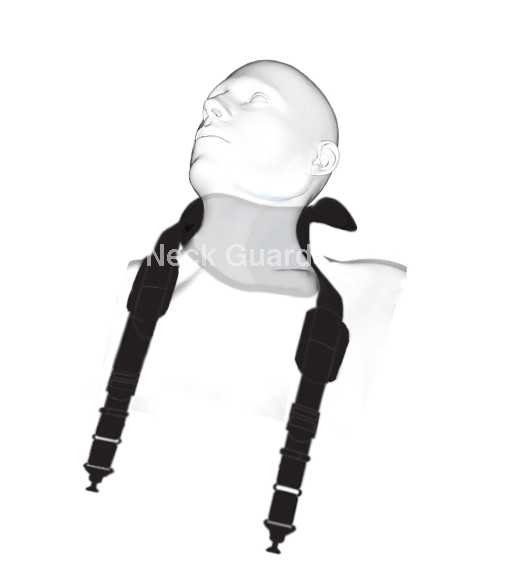 Neck Guard is Perfect For...

If only Michelangelo had Neck Guard

Read how the famous sculptor agonized while painting the Sistine Chapel

Michelangelo: To Giovanni da Pistoia
“When the Author Was Painting the Vault of the Sistine Chapel” -1509

I’ve grown a goiter from this torture I’m in,
swollen up here like a cat from Lombardy (or anywhere where the stagnant water’s poison).

My stomach’s squashed under my chin, my beard points like a finger to heaven,
I feel the back of my brain upon my neck,
I am pigeon-breasted, like a harpy.
My brush above me all the time, dribbles paint so my face looks like a fine Byzantine floor.

My haunches are grinding into my guts,
my poor ass strains to work as a counterweight,
every gesture I make is blind and aimless.
My skin hangs loose below me, my spine’s
all knotted from folding over itself,
I’m bent and taut as a Syrian bow.

And because I’m like this, my thoughts
when expressed, come out weird and jumbled.
Anyone shoots badly through a crooked blowpipe.

My painting is dead.
Defend it for me, Giovanni, protect my honor.
I am not in the right place—I am not a painter.

Numerous epidemiologic studies have examined musculoskeletal disorders (MSDs) that affect the cervical spine and analyzed their relationship to physical workplace factors [1-5]. However, due to the various definitions and methods of data reporting, the nature of MSDs remains controversial. Disparities arise not only with respect to which causative factor relates to neck injury but also to the relative importance assigned to each factor. Nonetheless, strong evidence exists for the predominance of four risk factors: static contraction, forceful exertion, prolonged static loads, and extreme working posture [6]. Repetitive work was considered a secondary factor. Age and gender were considered confounding factors and are not consistent with work-related factors [6].

Adding to the controversy is the limited amount of information regarding occupational injuries of U.S. workers. Since 1972, the only routinely published, national source of information is the Annual Survey of Occupational Injuries and Illnesses (ASOII). This survey, conducted by the Bureau of Labor Statistics (BLS) within the U.S. Department of Labor, is a random sample of approximately 250,000 private-sector establishments. According to the BLS, approximately 349,000 musculoskeletal disorders (MSDs) occurred in 2016. Of these, sprains, strains, and tears accounted for 244,000, approximately 70% of all MSDs, and soreness/pain accounted for another 67,500, approximately 19% of all MSDs [7]. The BLS data also indicated that neck involvement was present in approximately 5,100 MSDs.

Unfortunately, the BLS data excludes self-employed workers, farms with fewer than 11 employees, private households, and all government agencies [7]. Even more importantly, multiple occupational sectors were not accounted for in the BLS data. The potential impact of such omissions was indicated in a more targeted study within the single state of Washington (whose population represents only 2.27% of the U.S. population). During the 1994-2002 study interval, Washington’s workers compensation program (operated by the state’s Department of Labor and Industries) annually accepted 4,752 work-related MSD claims involving the neck (out of a total of 40,640 work-related MSD claims) – nearly as many as accounted for nationally by the BLS. The Washington study further reported that annual direct costs associated with neck-related MSDs exceeded $14.2 million. A simple projection of similar neck-related MSD rates and costs would lead to estimates of approximately 209,000 occurrences and $626 million in costs for the nation as a whole.

Although the costs estimated from the study in Washington state are based on assumptions of similarity across states, they are consistent with an overall occupational MSD cost estimate reported by the National Institute for Occupational Safety and Health (NIOSH): $13 billion annually [8]. To validate this consistency, we note that Washington’s neck related MSD costs represented approximately 4.57% of all MSD costs [10]. Projecting these costs nationally, the total MSD cost estimate would be $626 million/0.0457 = $13.7 billion, which is very close to the NIOSH estimate.

The problem of work-related neck pain is a global one. As an example, the direct costs of neck pain in the Netherlands were estimated at $160 million in 1996, with indirect costs of $527 million [9]. The total cost of neck pain represented 0.1% of the gross domestic product in 1996 [9], although the share of these costs that were specifically attributable to work related neck pain were not indicated. Although MSD definitions and methods of reporting within the European Union are not standardized, the data from the Netherlands, along with that in America, suggest that the problem is significant in both health and economic terms.

To address this problem, Psyche Comfort Products, LLC has designed and developed the next generation Neck Guard, intended for any occupational trade in which overhead work is performed. It is designed to reduce loading of internal musculoskeletal structures during maintenance of extended neck postures that individuals experience during overhead occupational tasks. Neck Guard was developed to reduce the pain associated with muscle fatigue and improve worker endurance while performing overheard work. As a step toward this vision, we have conducted initial cervical muscle activation assessments and engineering interface load computations in order to establish proof-of-concept, which was reduction of cervical muscle activation and more uniform dispersion of interface loading in the head/neck region.

PRO•PAP™ is a division of TA International.

The names “Psyche”, “PRO•PAP™”, and “Neck Guard” are copyrighted, and are property of TA International.

The copyright material published on this site, including all portions of the website, content, site design, text, photos, images, graphics and the selection and arrangement of the material on the site (the “material”) is owned by TA International, and is protected by the provisions of the Copyright Act , R.S.C. 1985 c. C-42., the Hague Agreement and the Madrid Protocol. All rights reserved. No part of this material may not be reproduced or distributed, in whole or in part, without the prior written permission of TA International. However, reproduction and distribution, in whole or in part, by non-profit, research or educational institutions for their own use is permitted if proper credit is given, with full citation, and copyright is acknowledged. Any other reproduction or distribution, in whatever form and by whatever media, is expressly prohibited without the prior written consent of TA International.